My first night sleeping in the city of Jerusalem was quite a struggle. That’s probably one of the most annoying struggles when traveling. I’m not that kind of person who can just sleep like that. I need to ‘adapt’ the environment first, the room, the bed, etc. I know it’s a pain in the ass, but I bet some of you must have the same struggle as me. So yeah, I didn’t have enough sleep.

But the morning view, when I woke up at 7 was pretty nice. That golden color cast the yellow bricks which almost all buildings here are the same color, looks beautiful. And it surely a pretty cold morning, I can feel it when I open the sliding door to the balcony to have this view.

Our second day in Jerusalem, a beautiful city with millions of story. If you haven’t already, please check our previous posts when we first enter Jerusalem visiting the Church of St. Peter and King David’s Tomb for the first day.

As per usual, everybody with their morning routine and a buffet breakfast from the hotel, get on the bus, a morning greet from Mr. Dani, a little brief for the itinerary today. Our first stop of the day will be Chapel of The Ascension.

There are two things that Mr. Dani told us while we’re on the way to the Chapel of Ascension. First, they may not open yet because it supposed to be opened at 9 in the morning, so we might have to wait. Second, he warned us to be alert and watch our belongings while we’re walking around this Mt. Olives area.

It’s one of the places a high crime rate to tourists or pilgrims in Jerusalem. It’s within the west bank area. He got an info that a tourist just got robbed yesterday somewhere close to our destination.

The chapel is located on the Mount of Olives. A mountain ridge east of Jerusalem. Separated by the Kidron Valley from the eastern hill where there are City of David and Temple Mount. Named after the olives that once covered it slopes.

Just as predicted, we’re waiting for about 20 minutes before the chapel opened because the watchman has not arrived yet. I see Mr. Dani made some call asking for the place to be opened earlier. He’s trying to give us the best possible itinerary today, we have a lot to see today. So he’s trying to keep up with the tight schedule.

While waiting for the gate to be opened, here we are with another story from Mr. Dani. I’ve read some articles about the chapel, but listening to his story was kinda felt different.

About The Chapel of Ascension

This Chapel is where the Christian pilgrims visit to commemorate Jesus ascending to the heavens. Is this the real location? It is believed to be the place although some early Christians used to gather in a cave to commemorate the ascension where it is located just downhill from the present location.

The issuance of the Edict of Milan by the Roman Emperor Constantine I in 313 made it possible for Christians to worship overtly without fear of government persecution. So then the location moved uphill. Saint Helena, mother of Constantine I, during her pilgrimage between 326 and 328, identified two spots on the Mount of Olives as being associated with Jesus’ life. 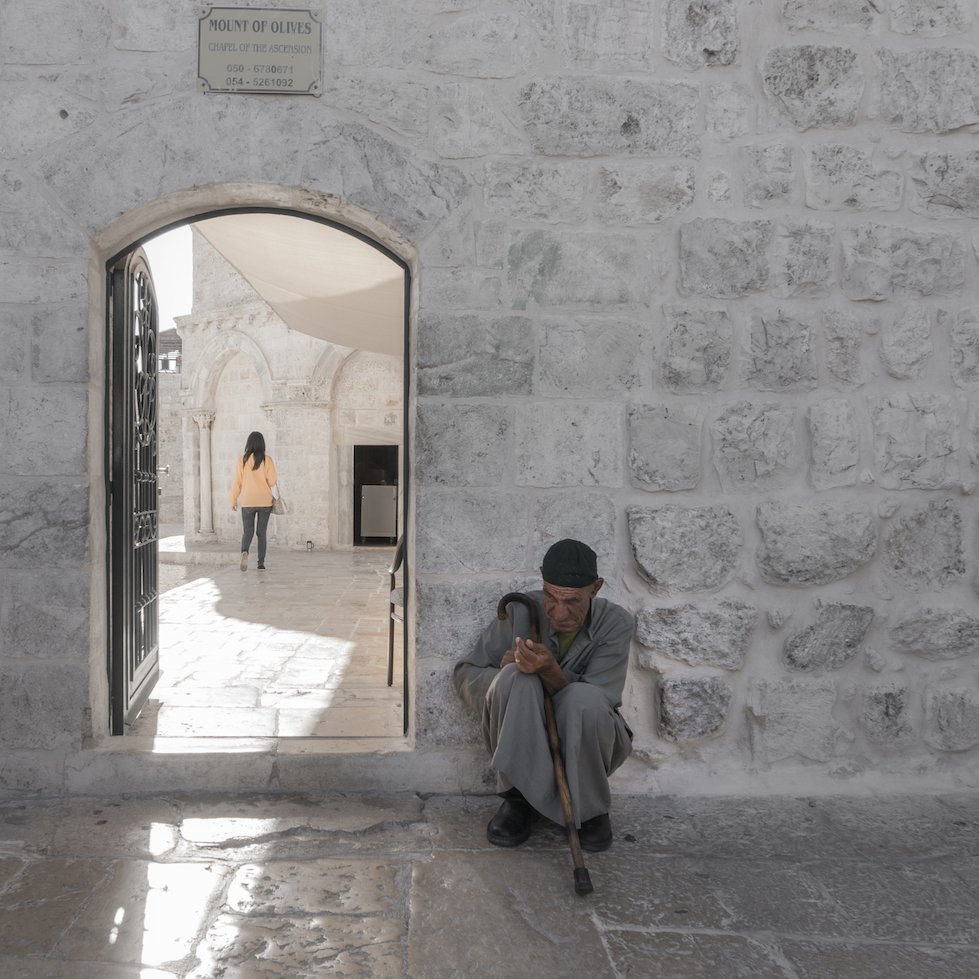 The place of his Ascension, and a grotto associated with his teaching of the Lord’s Prayer. Which later on her return to Rome, she ordered the construction of two sanctuary complexes at these locations. So now this chapel is within a complex.

This chapel is somewhat a mix between Christian and Islam influence. It’s quite a complicated story but here’s a short version.

The first complex constructed on the site of the present chapel was known as Imbomon (Greek for “on the hill”). It was a rotunda, open to the sky, surrounded by circular porticos and arches.

In 390 AD (some say around 380 AD), Poimenia, a wealthy Roman woman of the imperial family financed the addition of a Byzantine style church at the site of Helena’s original construction. The second sanctuary at this location was called “Eleona Basilica” (elaion in Greek means “olive garden”, from elaia “olive tree”)

By 670 the original structure had been destroyed and rebuilt but the Frankish bishop and a pilgrim, Arculf, reported the footprints were still to be seen in the dust of its floor. He described,

a round building open to the sky, with three porticoes entered from the south. Eight lamps shone brightly at night through windows facing Jerusalem. Inside was a central edicule containing the footprints of Christ, plainly and clearly impressed in the dust, inside a railing.

In the 12th century, the Crusaders rebuilt an octagonal chapel, set within a fortified monastery. From this strategic position on the crest of the Mount of Olives, the Crusaders controlled the road between Jericho and Jerusalem. 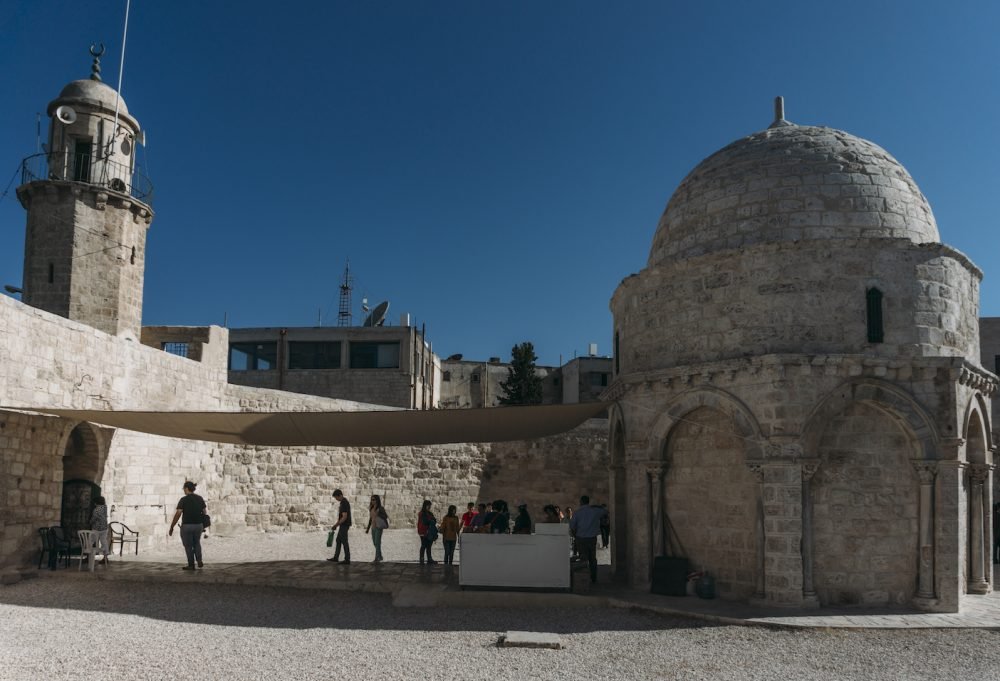 The Current Chapel of Ascension

After the fall of Jerusalem in 1187, the ruined church and monastery were abandoned by the Christians, who resettled in Acre. During this time Salah ad-Din established the Mount of Olives as a waqf. The chapel was then converted to a mosque, and a mihrab installed in it.

But because the vast majority of pilgrims to the site were Christian, to show a goodwill Salah ad-Din ordered the construction, two years later, of a second mosque nearby for Muslim worship while Christians continued to visit the main chapel. Around this time the complex was fortified with towers, walls, and guarded.

The main structure of the chapel is from the Crusader era. Which later the Muslim added the octagonal drum and stone dome. The interior of the chapel consists of a mihrab indicating the direction of Mecca in the south.

On the floor, inside a stone frame, is a slab of stone called the “Ascension Rock”. It used to be both footprints of Jesus. But the section bearing the left footprint taken to the Al-Aqsa Mosque in the Middle Ages.  So what’s left here is the right footprint.

It feels great to be inside the chapel, knowing that Jesus once stepped on this stone and going up to the heaven. This is the last point where He touched the earth. But on the contrary, this place often marked as a disappointment from pilgrims. Looks like people expect more from this place rather than just a tiny chapel with one stone inside. There’s literally nothing else to see.

There’s a fresh water just to the left side from the chapel where you can refresh yourself with. It’s clean and fresh. The watchman who guards this place sells souvenirs just before the entrance to the chapel, such as a poster of Jerusalem (USD 10) and other stuff that I don’t remember. 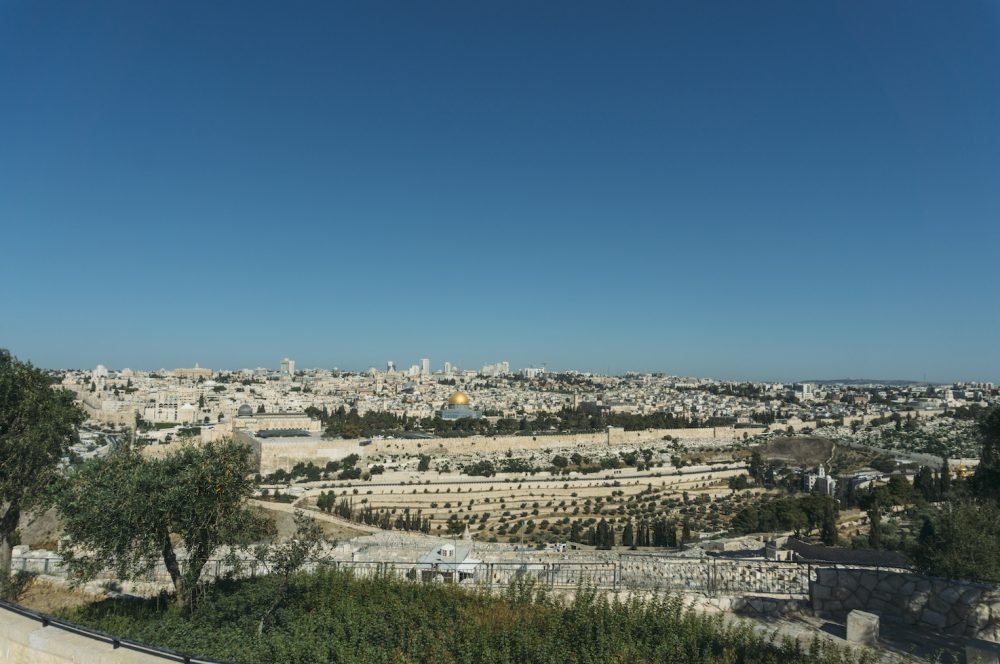 We’re done with this place in less than 20 minutes. Literally, the shortest visit that we ever had for a pilgrim site during our trip in Israel. From this chapel, we’re moving to a certain viewpoint where there’s this photo spot, with the view of Jerusalem and Temple Mount as the background. I think this is the place where every tourist will have a group photo because most tour company will bring us here.

But know this, they will print the photo. You can purchase it for $15 (if I’m not mistaken). And I’m sorry, I don’t mean to be negative, but I don’t think it’s worth my money.

First, it’s taken under a very harsh daylight sun which is not good. Second, the photographer used only a mediocre DSLR camera with kit lens. Third, the Temple Mount in the background will be photoshopped and made bigger in the printed version, it looks really fake. So if you are going through a group photo on Mount Olives like me, maybe you can really consider saving your money. 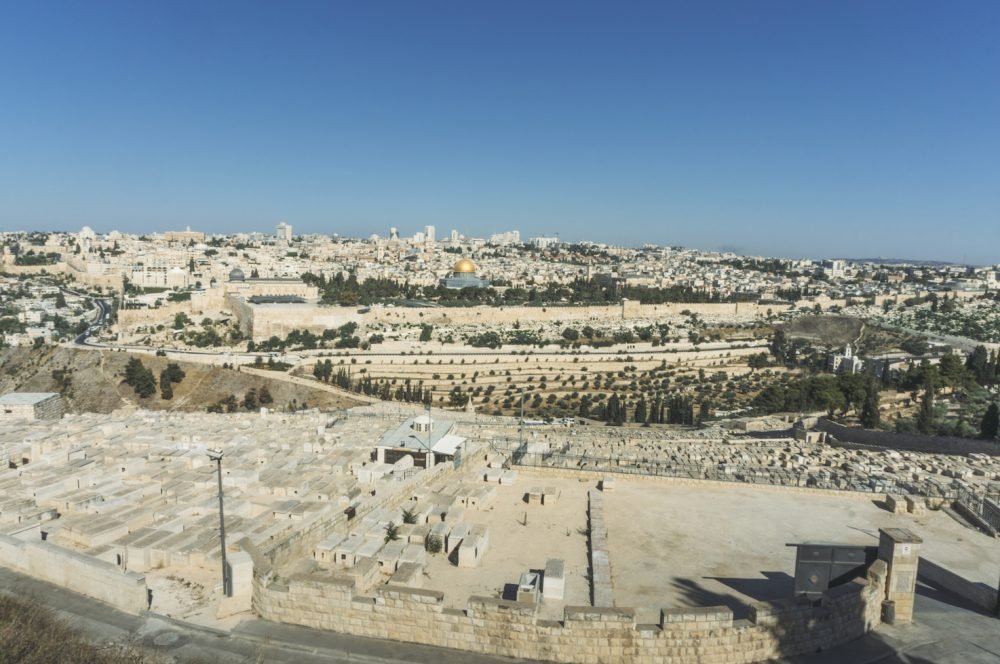 So if you are going through a group photo on Mount Olives like me, maybe you can really consider saving your money. But if you feel like buying, then just do it. I don’t have the group photo with me, but to give you the idea of what is it look like in the background, here’s some photo.

Usually, after the group photo, the route will be walking down the hill to the churches along the way ending in the Church of All Nation and Gethsemane. Which I will share later. There are another three possible sites on Mount of Olives that commemorate the Ascension of Jesus.

At the summit is the Russian Orthodox Church of the Ascension, dating from the late 19th century. A tall tower, one of Jerusalem’s most prominent landmarks, was built to enable pilgrims to see the Jordan River.

On the north side is the German Lutheran Church of the Ascension (also known as Augusta Victoria, after the wife of the Emperor Wilhelm II of Germany who initiated plans for the church in 1898), dating from the early 20th century. The fortress-like compound with a tall bell tower now hosts a hospital for the Palestinian population of Jerusalem.

Between the Russian and Lutheran churches is the Greek Orthodox Viri Galilaei Church. Its name means “men of Galilee”, a reference to the question posed to the apostles by two men in white after the Ascension: “Men of Galilee, why do you stand looking up to heaven…?”

We made our stop at the Dominus Flevit Church, where there is a viewing point. You can see the jews graveyard, golden gate, and temple mount. Mr. Dani made a short session explain to us about Jerusalem at this viewpoint.

I guess that’s everything I have for this post. Is it worth a visit? The Chapel of Ascension? Maybe I would say, the walk from the chapel to the Gethsemane altogether with the places you can visit along the way is what makes it worth. I really enjoy walking that way, I don’t see any reason why you should not.